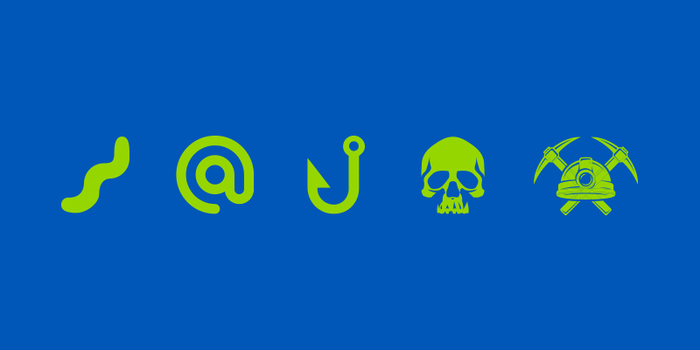 The Evolution of Cybercrime

From Landline Hacking to Cryptojacking

By its very nature, cybercrime must evolve to survive. Not only are cybersecurity experts constantly working to close hacking loopholes and prevent zero-day events, but technology itself is always evolving. This means cybercriminals are constantly creating new attacks to fit new trends, while tweaking existing attacks to avoid detection. To understand how cybercrime might evolve in the future, we look back to understand how it emerged in the past.

Cybercrime’s origins are rooted in telecommunications, with “hacker” culture as we know it today originating from “phone phreaking,” which peaked in the 1970s. Phreaking was the practice of exploiting hardware and frequency vulnerabilities in a telephone network, often for the purpose of receiving free or reduced telephone rates. As landline networks became more security savvy—and then fell out of favor—phone phreaking became less and less common. But it hasn’t been phased out completely. In 2018, a phone phreaker staged a series of creepy attacks in New York City WiFi kiosks, reminding us that the phreaks may have been forgotten, but they are certainly not gone.

Cybercrime as we currently think of it began on November 2, 1988 when Robert Tappan Morris unleashed the Morris Worm upon the world. Much like Dr. Frankenstein, Morris did not understand what his creation was capable of. This type of self-replicating program had never been seen before outside of a research lab, and the worm quickly transformed itself into the world’s first large-scale distributed denial of service (DDoS) attack. Computers worldwide were overwhelmed by the program and servers ground to a halt. Although Morris quickly released the protocol for shutting the program down, the damage had been done. In 1989, Morris was the first to be prosecuted and charged in violation of the Computer Fraud and Abuse Act.

At the turn of this century, we began to see a new era of malware emerge as email gave hackers a fresh access point. The infamous ILOVEYOU worm infected 50 million computers in 2000, corrupting data and self-propagating by exploiting a user’s email contacts. Given that the infected emails were coming from an otherwise trusted source, it forced many consumers to gain perspective on cybersecurity for the very first time. With antivirus software becoming a must-have for all computer owners, cybercriminals had to get inventive once again.

Phishing is the practice of tricking a user into willingly providing account logins or other sensitive information. This popular style of attack began with downloadable files through email, like the ILOVEYOU worm, but quickly grew more sophisticated. Phishing emails often imitate a trusted source, like an internet or phone service provider, and often include official-looking graphics, email addresses, and dummy websites to trick the user. In some cases, these phishing attacks are so convincing that even top government officials have been fooled—something we learned all too well in 2016 when the Democratic National Committee was breached.

With the rise of social media, we have seen a new style of phishing attack that doesn’t appear to be going anywhere anytime soon. Messages from Facebook, Instagram, Twitter and other social media accounts are frequent and increasingly sophisticated sources of social media phishing.

The Rise of Ransomware

No history of cybercrime would be complete without an examination of ransomware, a type of malware that gains access to critical files and systems and encrypts them, blocking a user from accessing their own data. Perpetrators extort the user, threatening to permanently delete the data or—in some cases—expose incriminating or embarrassing information. While ransomware has been around for decades, encryption and evasion techniques have become increasingly refined, sometimes at the hand of state actors. One of the most infamous examples of ransomware is the WannaCry attack in 2017, in which North Korean hackers used loopholes developed by the United States National Security Agency in the Windows operating system to attack more than 200,000 computers across 150 countries.

This made ransomware an international cybersecurity boogeyman, but it shouldn’t be your top concern. Webroot security analyst Tyler Moffitt explains why it’s a complicated strategy:

“Ransomware requires criminals to execute a successful phish, exploit, or RDP breach to deliver their payload, bypass any installed security, successfully encrypt files, and send the encryption keys to a secure command-and-control server—without making any mistakes,” Moffitt said. “Then the criminals still have to help the victim purchase and transfer the Bitcoin before finally decrypting their files. It’s a labor-intensive process and leaves tracks that must be covered up.”

A more recent workaround for the hard work of ransomware? Cryptojacking. Cryptojacking works by embedding JavaScript code into a website, which can then harvest the processing power of all devices that visit that site, using device processors to mine cryptocurrency for the host. This resource theft drags systems down, but often stealthily enough to go undetected; a fact that makes it very attractive to hackers. The number of cryptojacked URLs detected more than doubled from September to December of 2018, and cryptojacking attacks have officially surpassed ransomware in prevalence.

“Cryptojacking costs basically nothing to pull off and has much less illegal footprint,” Moffitt said. “When criminals are leveraging victims’ hardware (CPU) and power for siphoned crypto, the profits are very appealing. Even with the volatility of crypto prices, large campaigns have been able to make hundreds of thousands of dollars in only a few months. It’s estimated that over 5% of the cryptocurrency Monero in circulation is the result of illicit mining.”

Until recently, a cyptocurrency mining service called Coinhive was responsible for 60% of all cryptojacking attacks. Coinhive announced in early March 2019 that they would be shuttering the service. But this is by no means a death knell for crytpojacking—competitors are already rushing to fill the vacuum, not to mention inventing new ways to pivot off of existing cryptojacking techniques.

Being prepared for this next generation of cybercrime requires a few things from internet users. Keeping devices protected with antivirus software is a strong first step, but awareness of current threat trends is also helpful in preventing outside actors from viewing your data. Pairing antivirus software with a trusted VPN wraps your web traffic in a tunnel of encryption, shielding it from prying eyes. A double-pronged antivirus-plus-VPN defense will stop a majority of cybercrime in its tracks, but it’s by no means where your cybersecurity plan should end.

The best tool you have against evolving cybersecurity threats? Ongoing education. Read Webroot’s 2019 Threat Report to prepare yourself against threats on the horizon, and check back for regular cybercrime updates.