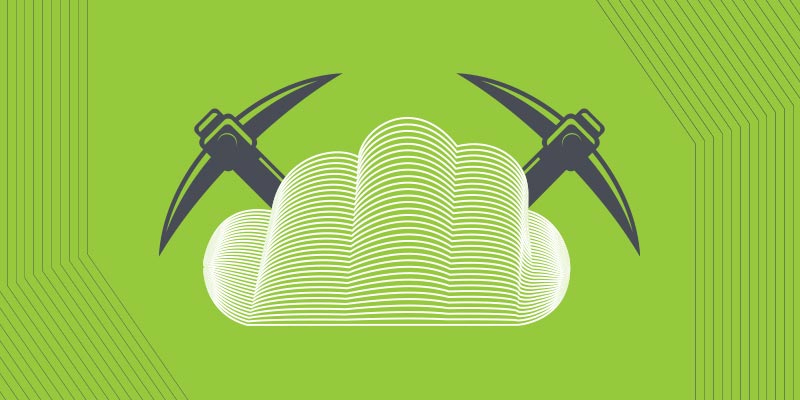 Getting to Know Cloudjacking and Cloud Mining Could Save Your Business

A few years back, cryptojacking and cryptomining emerged as relatively low-effort ways to profit by hijacking another’s computing resources. Today, cloudjacking and cloud mining capitalize on similar principles, only by targeting the near infinite resources of the cloud to generate revenue for attackers. Knowing this growing threat is key to maintaining cyber resilience.

Enterprise-level organizations make especially attractive cloudjacking targets for a few reasons. As mentioned, the computing power of cloud networks is effectively limitless for all but the most brazen cybercriminals.

Additionally, excess electricity consumption, one of the most common tipoffs for smaller scale cryptojacking attacks, often goes unnoticed at the scale large corporations are used to operating. The same goes for CPU.

Careful threat actors can also throttle back the amount of resources they’re ripping off—when attacking a smaller organization, for instance—to avoid detection. Essentially, the resources stolen at any one time in these attacks are a drop in the Pacific Ocean to their largest targets. Over time, though, and depending on particulars of a usage contract, the spend for CPU used can really add up.

“Hackers have definitely transitioned away from launching ransomware attacks indiscriminately,” says Webroot threat analyst Tyler Moffitt. “It used to be, ‘everybody gets the same payload, everyone has the same flat-rate ransom.’

Arguably the most famous example of cloudjacking, at least in terms of headlines generated, was a 2018 attack on the electric car manufacturers Tesla. In that incident, cybercriminals were discovered running malware to leech the company’s Amazon Web Service cloud computing power to mine cryptocurrency.

Even with an organization of Tesla’s scale, the attackers reportedly used a throttling technique to ensure their operations weren’t uncovered. Ultimately, they were reported by a third-party that was compensated for their discovery.

More recently, the hacking group TeamTNT developed a worm capable of stealing AWS credentials and implanting cloudjacking malware on systems using the cloud service. It does this by searching for accounts using popular development tools, like Docker or Kubernets, that are both improperly configured and running AWS, then performing a few simple searches for the unencrypted credentials.

TeamTNT’s total haul remains unclear, since it can spread it’s ‘earnings’ across multiple crypto wallets.  The fear though, now that a proven tactic for lifting AWS credentials is out in the wild, is that misconfigured cloud accounts will become prime targets for widespread illicit cloud mining.

Hackers aren’t just launching cloudjacking attacks specifically against storage systems and development tools. As with other attack tactics, they often see MSPs and small and medium-sized businesses (SMBs) as attractive targets as well.

“Several attacks in the first and second quarters of 2019 involved bad actors hijacking multiple managed service providers,” says Moffitt. “We saw that with Sodonakibi and GrandCrab. The same principles apply here. Hacking a central, cloud-based property allows attackers to hit dozens and potentially hundreds of victims all at once.”

“The cloud offers an attractive aggregation point as it allows attackers access to a much larger concentration of victims. Gaining access to a single Amazon web server, for instance, could allow threat actors to steal and encrypt data belonging to dozens of companies renting space on that server hostage,” says Moffitt.

Some years ago, smaller businesses may have escaped these cloud compromises without too much disruption. Today, the data and services stored or run through the cloud are critical to the day-to-day even for SMBs. Many businesses would be simply crippled should they lost access to public or private cloud assets.

The pressure to pay a ransom, therefore, is significantly higher than it was even three years ago. But ransoms aren’t the only way for malicious actors to monetize their efforts. With cloud mining, they can get right to work making cryptocurrency while evading notice for as long as possible.

How to protect against cloudjacking and cloud mining

Moffitt recommends using “versioning” to guard against cloudjacking attacks. Versioning is the practice of serializing unalterable backups to prevent them from being deleted or manipulated.

“That means not just having snapshot or history copies—that’s pretty standard—since with ransomware we’ve seen actors encrypt all of those copies. So, my suggestion is creating immutable backups. It’s called versioning, but these are essentially snapshot copies that can never be edited or encrypted.”

Moffitt says many service providers have this capability, but it may not be the default and need to be switched on manually.

Two more tactics to adopt to defend against cloud jacking involve monitoring your configurations and monitor your network traffic. As we’ve seen, capitalizing on misconfigured AWS infrastructure is one of the more common ways for cybercriminals to disrupt cloud services.

Security oversight of devops teams setting up cloud applications is crucial. There are tools available that can automatically discover resources as soon as they’re created, determine the applications running on the resource and apply appropriate policies based on the resource type.

By monitoring network traffic and correlating it with configuration data, companies are able to spot suspicious network traffic being generated as they send work or hashes to public mining pools that are public and could help identify where mining is being directed.

There tends to be a learning curve when defending against emerging attacks. But if businesses are aware of how cloud resources are manipulated by threat actors, they can be on guard against cloudjacking by taking a few simple steps, increasing their overall cyber resilience.