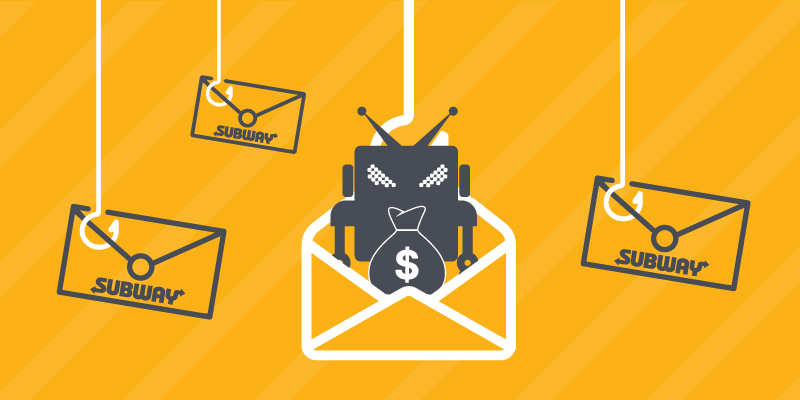 Customers of Subway U.K. have been receiving confirmation emails for recent orders that instead contain malicious links for initiating Trickbot malware downloads. Subway has since disclosed that it discovered unauthorized access to several of its servers, which then launched the campaign. Users who do click on the malicious link initiate a process in Task Manager that can be stopped to prevent additional illicit activities typical of Trickbot infections.

At least 22 websites belonging to various municipalities in Lithuania were compromised after a sophisticated cyberattack allowed intruders to take control. After gaining access to the sites, the attackers began delivering misinformation emails under the auspices of Lithuanian government and military ministries. Much of the misinformation being spread revolved around military enlistment and the suspicion of corruption at an airport housing a NATO facility.

Researchers at CybelAngel have uncovered over 45 million healthcare records on unprotected servers. Amongst the sensitive data was personal health information and other personally identifiable data, all left on servers with a login page that allowed access without credentials. It’s likely this data was left unsecured because of the number of medical professionals needing to access, though the security lapse is inexcusable. With healthcare facilities prime targets for ransomware attacks, communications between organizations should entail strict security to protect the valuable data.

Officials for the city of Independence, Missouri, have been working for weeks to recover from a ransomware attack that forced them to take several essential services offline. Fortunately, recent file backups were available to restore some of the encrypted systems to normal. At this point, officials remain uncertain if customer or employee data was stolen during the attack, and no ransomware group has come forward to take credit for the attack or post the stolen data for sale.

California’s Sonoma Valley Hospital recently delivered letters to roughly 67,000 patients regarding a data breach back in October that may have compromised personally identifiable information and other healthcare records. While the hospital was able to shut down some of their systems to prevent the breach from spreading, the attackers are believed to have gained access to and stole sensitive data.

We're stoked to be in Austin, TX today talkin' shop with the spiciest #ITpros around 🌶🔥🥵

so good to be here in person with the @SpiceWorks community at #SpiceWorld2022 / #SpiceWorldHybrid!! Come by booth #36 and say hi!

#SpiceWorld2022: How can your org ensure business continuity, keep your data secure and recover quickly even when attacked?

Learn about our framework for #cyberresilience with Sam Kumarsamy, Director of Product Marketing from OpenText Security Solutions, today at 3:15 CT.