New year; similar Scams. In 2013,  I wrote an article talking about the popular Fake Microsoft Security Scams that were doing the rounds. As expected, these type of scams have continued to grow in popularity as a way for nefarious people to get money from users. Unfortunately, today these scams are more popular than ever. While the premise remains the same, some new versions of these blur the lines between what is a scam and what isn’t.

It’s worth having a quick look back at what exactly one of those aforementioned scams entails. The classic Microsoft scam goes something like this: the user gets a pop-up in their browser that tells them that they are infected and says to call a number (toll free of course) to get said infection removed. Once the user calls this number they will be directed to a website that allows the scammers (*agents*) to connect to the PC. 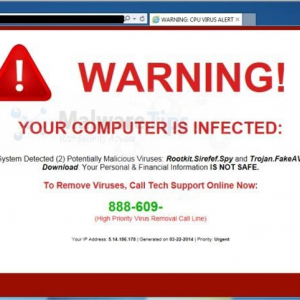 Depending on the version the webpage (see screenshot above), the scam may try to set itself as the homepage, which means that even if the user restarts their PC, they will continue to see this warning message. This can help back up these scammers’ claims that the PC is infected.

Once the scammers get connected they will show the user all the “infections” that are located in the Windows Event Logs. Windows Event logs are extremely useful to diagnose Windows issues. We would commonly use them to look for hard disk issues as any time Windows has an issue writing to a hard disk it will create a warning/error in the event logs.

In the example below, I have shown a snapshot of the warnings and errors from a test PC. It’s worth mentioning that even on a brand new PC there will be warnings or alerts in the Windows event logs. 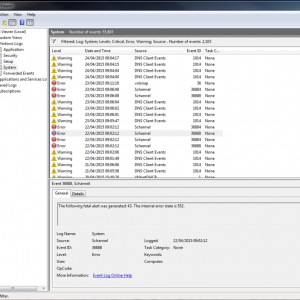 Another version of this type of scam is the version that locks the browser and uses quite intimidating language (as seen in the case below). Apparently, this user has a potentially FATAL Virus! Thankfully, we are a bit away from computer malware being able to cross the organic barrier to kill users but it’s the type of message that can catch less technical users off-guard. In certain cases the alert pop-up will keep re-appearing this locking the browser session. 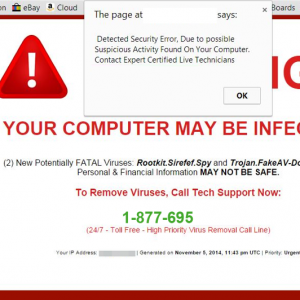 The biggest change compared to when we discussed this topic in 2013 is that these scams have now spread to other platforms, with Mac versions of these scams becoming increasingly popular. And they follow the exact same process as the PC versions. Remember that Macs do get malware and it highly advised that you install an antivirus product on your Mac.

Since these scams use a website, any device that has a browser can fall victim to this type of scam. They’re not OS dependent so if your internet enabled-toaster has a screen and a web browser it could get this type of alert! Joking aside, since it’s a browser-based scam, it’s advisable to have a backup browser installed just in case you have issues with your primary browser. 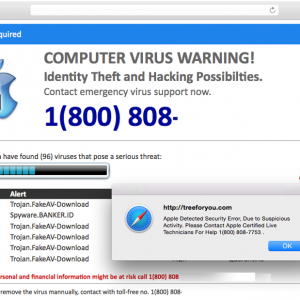 The Mac versions of this scam are pretty much identical to their PC counterparts. The only difference is that they won’t use the Windows Event Log viewer as it doesn’t exist on the Mac platform but they will use other tricks to try to fool users. In theory you could have a version that targets the Linux platform (since it’s browser based) but that platform (generally speaking) is used by more technical users and thus isn’t the target platform for these scammers.

The most disappointing of the new trends in Fake Security Scams, is the emergence of the “Legitimate” version.  What do we mean by this?That well-known and respected multinational companies are using malware as a reason to charge users a fee to fix a device or service. Talk to anybody who works in IT and probably the most common reason why users suspect hardware isn’t working is due to a virus. It’s rarely (if ever) actually due to a virus, although there are of course exceptions to this. Remember the majority of malware these days is designed with the end goal of financial benefit to the person/group pushing the malware.

There is no real advantage for a scammer to stop your printer from working. The days of malware being made just to cause annoyance is long gone (although occasional cases still exist). So now let’s take a look at some of the common “legitimate” Scam types:

Your PC is part of a Botnet (an ISP favourite)

The botnet is a scam that has grown in popularity. An ISP (Internet Service Provider) will claim that a user is part of a botnet (Zeus being a favourite) and that for a flat fee they can clean out this botnet. Since the call has come from a legitimate source, the user will let their guard down and let the ISP “help” them out.

I have been connected to a number of these cases where the user has a PC that is supposedly part of a botnet. After running through the system with a fine tooth-comb and capturing network events, I was unable to find any evidence of botnet traffic. In these cases I advise the customer to contact the ISP and ask for the evidence used to determine the initial diagnosis. I have yet to hear back from any of these cases with some hard evidence of botnet traffic.

Printer (or other device) is not working because of a virus

This is by far and away the most popular type of “legitimate” scam that we encounter. A user is unable to get their printer working and they contact the hardware manufacturer. After going through a number of basic tests. it is determined that a virus is causing the issue and that they can remove the malware and setup the printer for a flat fee (notice the trend?).

I am picking on printers but it can be for any type of connected hardware. I have been connected to customers’ PC and have installed the printer for them after doing a full check for malware on the PC. In every case, it was just a matter of running through the steps and verifying that the device is installed.

What to do in the cases above

If you suspect that you have a virus that is causing a system issue, DO NOT give any credit card information to a 3rd party. Tell them you will contact them back, get the phone number directly from there Website (not the one they may give you over the phone). Contact Webroot and we can determine if there is a malware issue. Pretending to be from an ISP or an official company is a popular technique used by these scammers.

How to protect yourself from these scams

The tips that I discussed in 2013 are still valid. The first step is simply being aware that these scams exist!

Tips to best protect yourself:

I would like to think in two years’ time I won’t be writing another one of these but it’s a popular method to get money so I don’t see it vanishing any time soon. With Windows 10 fast approaching and with it being used on multiple platforms we may see these types of scams on all sorts of devices (perhaps even the Xbox one!). We have already seen CryptoLocker style apps on the Android platform and due to the popularity it’s only a matter of time before we start seeing mobile versions.

My advice would be to let people that aren’t technical know about these types of scams. The advanced user isn’t the target group for these scams so if you have less tech-saavy friends or family, let them know. Remember that as a Webroot customer, we can check your PC for malware free of charge.