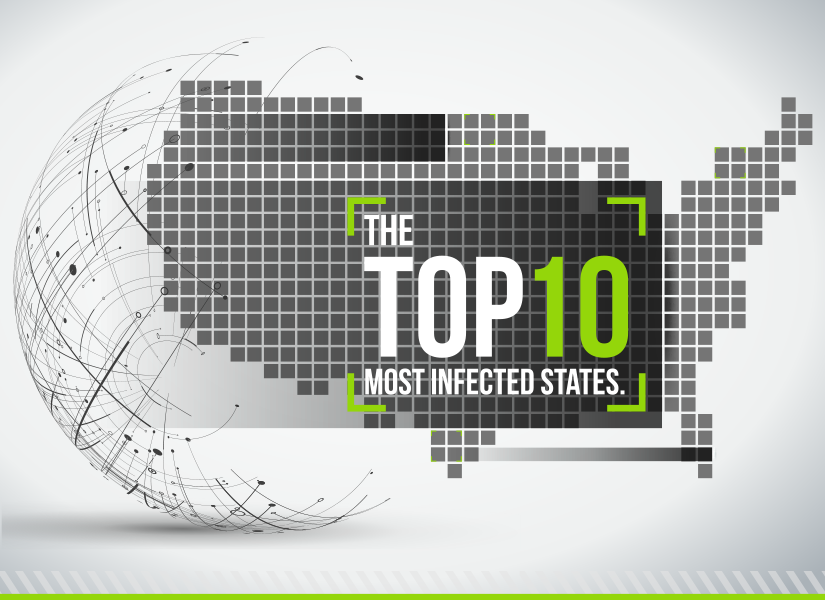 The sheer number of cyberattacks lately led us to this question: which states are at the greatest risk of a cyberattack? Naturally, we took it a step further. We looked into data on population and population density in an effort to find correlations. 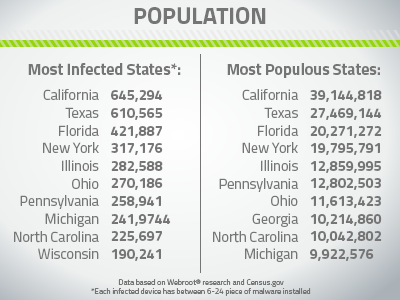 Which are the most infected states?

Opening up our list in the top three spots are California, Texas, and Florida. These three states were both the top three most populated and the top three most infected. This immediately led us to some questions: is the only correlation between states and the number of infections population? Based on these top three, that might be a safe guess.

Pulling up the rear of the top 10 are North Carolina and Wisconsin. North Carolina held strong at #9 for the Census’ most populated state and as Webroot’s 9th most infected state. The only major difference we noted is the fact that Wisconsin made it onto the list of the most infected states, while Georgia, 8th for most populous, doesn’t even rank.

Wait a second, Georgia doesn’t even rank? For the record, Wisconsin is the 21st most populous state, which puts them way outside the range of the top 10. What’s even more surprising about this discrepancy is that Georgia’s population is at 10,214,860 and Wisconsin’s is about half that at 5,771,337.

So, I think that safely puts our “more people equals more infections” theory to bed. 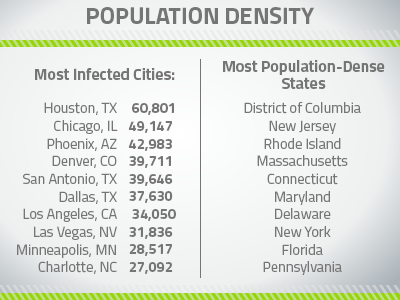 How do the most infected cities stack up?

The first thing we noticed in the above is how little correlation there seems to be between population density and the number of infected devices in the city, which we expected would have some impact. In fact, a quick glance at the list shows that none of the most infected cities are in any of the most population-dense states.

Additionally, even though Texas is 2nd on our list of most-infected states, it has its infections more localized in its larger cities. As a point of comparison, consider that NYC is one of the most population-dense cities in the U.S., but it conversely doesn’t even make it into the top ten for the number of infected devices.

Another example of an apparent contradiction to our hypothesis is that Arizona, which doesn’t even make it into the top ten for most infected devices or for population, but look how many infected devices reside in Phoenix: 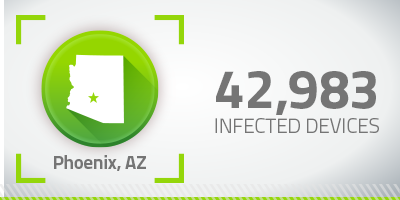 Although Phoenix is right behind Chicago and Houston in the number of infected devices, it’s a significantly smaller city. The same goes for Denver. Even though Colorado is at #23 for population and infected devices, Denver itself nonetheless makes its way into our top ten. Maybe Webroot users have some hometown pride?

Cybercriminals have no geographical bias. Whether you live in a big city or small town, east or west coast, you’re susceptible to being a victim of cybercrime. Check out our infographic on the most infected states and protect yourself with award-winning security.

Cybercriminals target #MSPs to launch attacks against their customers, ranging from email compromise and ransomware. https://t.co/nEuqazqtHc

If public WiFi is your only WiFi… pair your antivirus with a #VPN to protect yourself from tax-related identity theft. https://t.co/eYAq9gUhpS